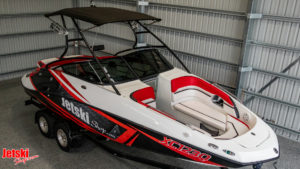 Viewing is only by appointment. SOLD

This boat has been owned by jetskishop for 3 years. a list of extras and work carried out on the boat.

LED lights everywhere and under water lights. (about $2000 in LED lights plus install)

Electric hydraulic brakes on the trailer. New tyres and with spare wheel.

Finance is available- ask for a quote.

2 hour hand over and education on launching and retrieving, plus personal guide to owner maintenance.

Check out this review from Trade boats.com

“It wasn’t too long ago that skiers were modifying their vessels for wakeboarding. Now it’s hard to find a skiboat that is not at least optioned with huge stereos and speaker towers that only hide what are sophisticated tow points and wakeboard racks while the interiors are nothing short of a floating lounge room.

Hiding under all that bling is plenty of power, traditionally dominated by large American V8s with more than 400 ponies pushing them along, but it was a pleasant change to be behind the wheel of a Sea-Doo wakeboat, producing the same horsepower, but with twin, three-cylinder, supercharged Rotex jet engines.

The big 7.1m Sea-Doo 230 Wake is a pure wake or skiboat that is extremely well designed and a genuine competitor in a market dominated by prop-powered hulls.

PRO TEST
To review the 230 Wake, TrailerBoat loaded her up with your usual wakeboard enthusiasts, including a pro wakeboarder to see how the Sea-Doo performs under normal wakeboarding conditions.

Testing the handling and performance of the twin 215hp supercharged Rotex engines was the first mission and I found that the big 7.1m hull actually started to feel like a real boat. Gone was the razor-edge handling of the small jet-powered hulls that makes these smaller versions feel a lot like spacious jetskis, instead the 230 had to be driven, and respected as a genuine ski hull.

Maneuvering is done with both the throttle and the steering wheel, so it took a couple of passes to get the feel of the 230. Jetboats steer by having the jet nozzle pivot and therefore shifting the propulsion axis of the boat. The more water that comes out of the nozzle, the more propulsion and steering you get. This all translated to a vast change in the turning circle in relation to the amount of steer and power that was being applied.

It takes a little while to be confident enough to accelerate into a corner that is too tight to complete at a slower speed, but 30 years of spinning a prop makes operating a jet hull a new learning curve. With a little practice, the 230 can certainly turn virtually on itself.

The small Rotex engines produced the grunt needed, but there are some benefits of this configuration over V8 engines. The Rotex doesn’t have saltwater running through the block to cool it, increasing the longevity of the engines through its closed loop cooling system.

NO CAVITATION
We were unable to record exact fuel figures for the Sea-Doo, but the dual jet engines were very efficient during the test, and with jet propulsion there is no cavitation that can come from a slipping prop trying to get a hull and skiers out of the water.

I have to admit to being a rev head and say that I did miss the rumble of a V8 and the crunch of a suicide clutch, but the performance of the 230 Wake left me in no doubt that Sea-Doo have a genuine, large wakeboat that has the performance that we have come to expect from our skiing hulls.

With a total of 430hp providing the thrust, the 230 Wake had plenty of power to do the job of both cruising and pulling wakeboarders out of the water.

Reversing the hull was also a challenge for someone used to operating a prop due to everything being back to front. Turning to the right sends the transom left and instead of having a drop in the transom when reversing it tended to lift. It is true that a jet-powered hull can maneuver in extremely shallow water, but reversing the engines into the beach must be done carefully to avoid picking up any sand and sending it through the jet. With just a small amount of practice, jet engines are very simple to operate and the 230 was no exception.

FAST COMFORT
The hull is designed for speed so we weren’t expecting the comfort that you’d achieve from a steep deadrise but the weight of the hull, especially with loaded ballast tanks and a sharp entry point of the bow, made the hull very comfortable. Taking into consideration that the test was done on Queensland’s Moreton Bay, this was even more impressive considering these hulls are traditionally operated in rivers and lakes. The wide reverse chine added to the hulls stability, proving that Sea-Doo put a lot of research and development into their hulls.

The helm was extremely comfortable to operate with controls in good reach. A dual-stick control box was well positioned starboard of the wheel along with light switches.

To the left of the wheel were ballast tank controls and a handset for the PA system. The microphone is connected to the speaker tower and is a good idea for improving communication between skiers and drivers. I initially thought it was there to give the wife helpful hints when reversing the trailer down the boat ramp.

DIAL UP A PERFECT PASS
The dash was stacked with speedo, rpm and fuel gauges, stereo controls as well as a host of warning and indicator lights. The centre of the dash has the BRP Perfect Pass system that allows drivers to dial in the skiers preferred speed setting for a fault-free pass, but I was unable to work out just how it operates on the day.

There is no first mate seating as such but instead, the observer has a lounge-style seat with a secure glovebox that also houses the CD player. The rest of the setup was your standard split-screen bowrider that was extremely well designed for a wakeboat and very comfortable. Even in the chop that was around on the day, the bow lounges were luxurious and drinkholders, grabrails and padding all positioned well.

The large swim platform had plenty of room to get skis or wakeboards on and off. A small fold-down boarding ladder gave access to the platform from the water and the engine bay at the transom was covered to form a sun lounge.

The waketower gave a nice, high tow point and also housed speakers for the PA and stereo system. A small bimini top for keeping the sun off the skipper was separate to the waketower.

MAKE YOUR WAKE
The ballast system on the 230 Wake made an incredible difference to the shape and size of the wake. Sea-Doo were happy to fill and change the amount of water in the ballast tanks to demonstrate how well the tanks actually work, and with a pro wakeboarder on hand to show us how it is done, the 230 Wake proved it was more than just a fast, floating lounge room.

The dry weight of the hull is 1519kg and loading the tanks adds another 450kg, so once loaded and fuelled, the wake was shaped by well over 2000kg. The weight of water in the ballast tanks increases the size of the wake while adjusting the trim changed the shape of the wave, moving from thick open wakes to high peaking wakes to achieve maximum air.

The finish of the 230 Wake was as impressive as its performance with great looking red and white interior, polished finish on the tower and tattoo style graphics. The Wake comes complete with navigation lights, custom trailer with swing-away drawbar, two 12V jacks and clip-in carpet. The only option worth considering is the retractable windscreen which opens up the helm and makes plenty of sense during a hot Aussie summer. 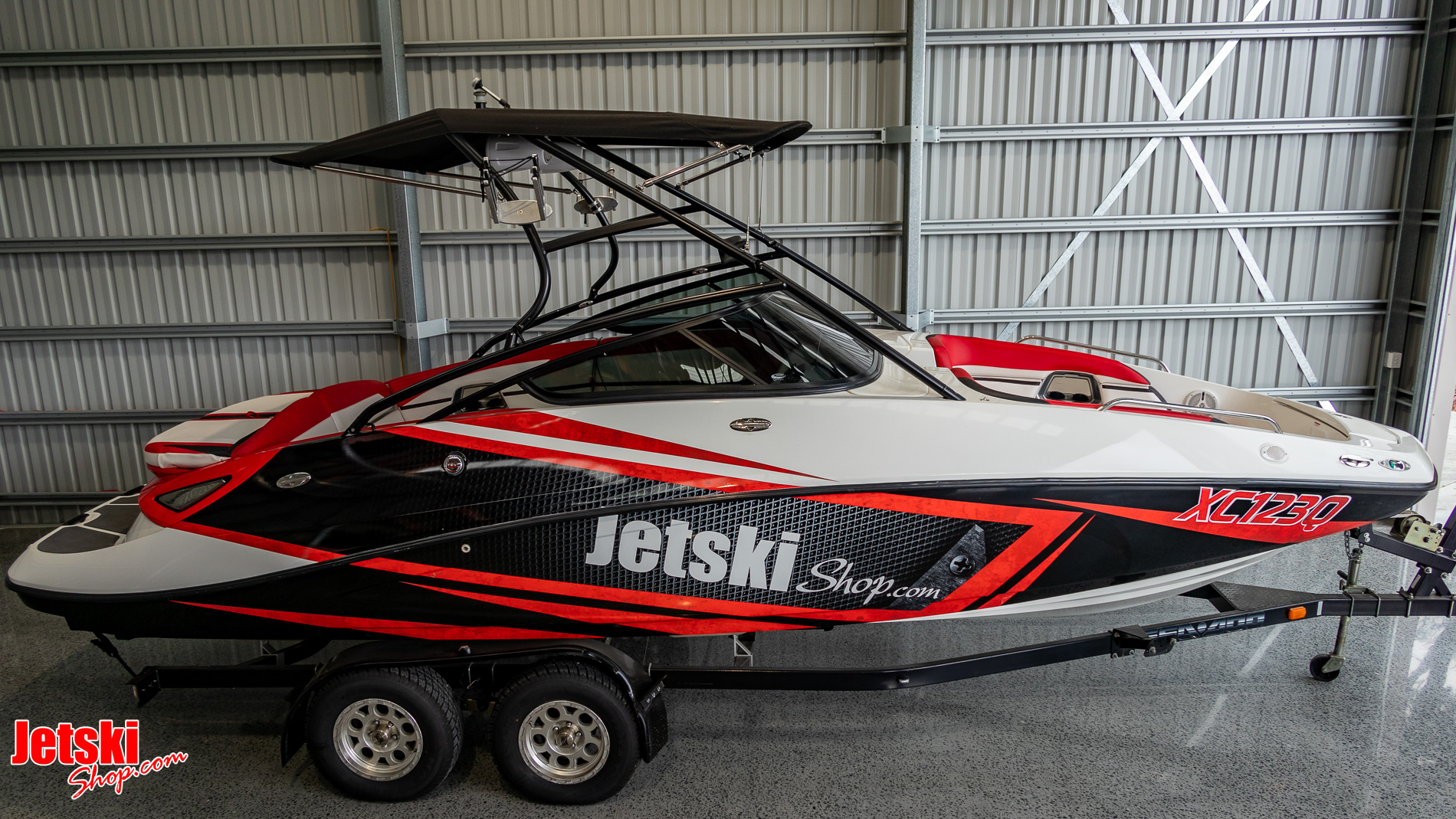 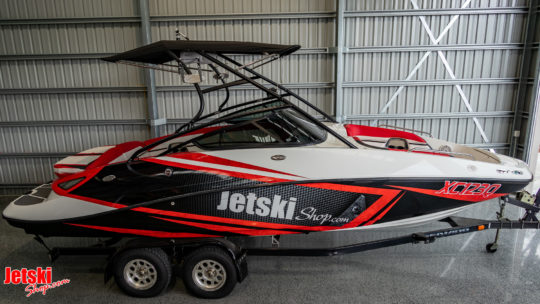 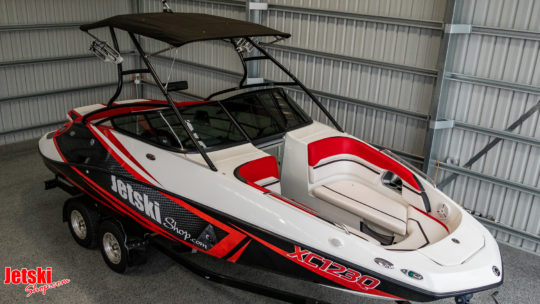 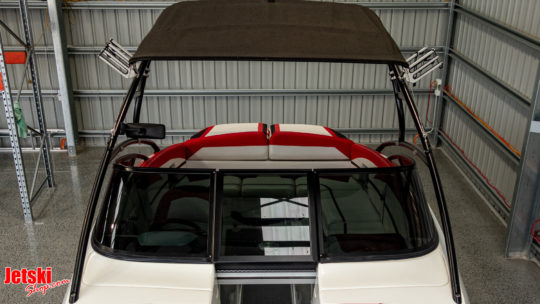 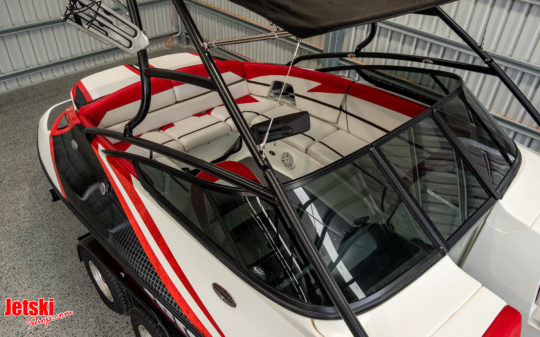 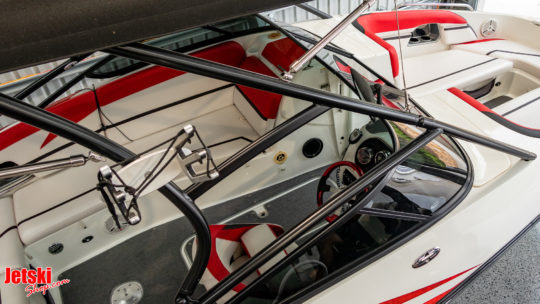 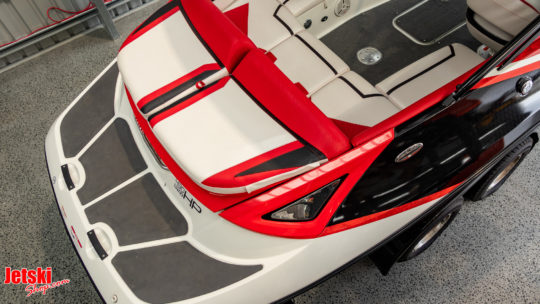 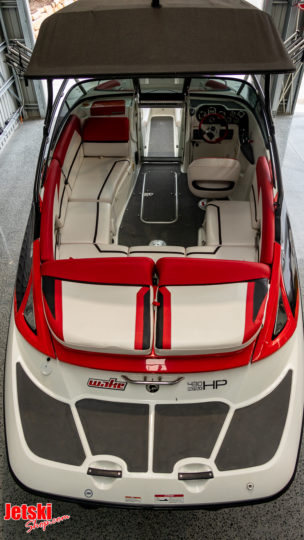 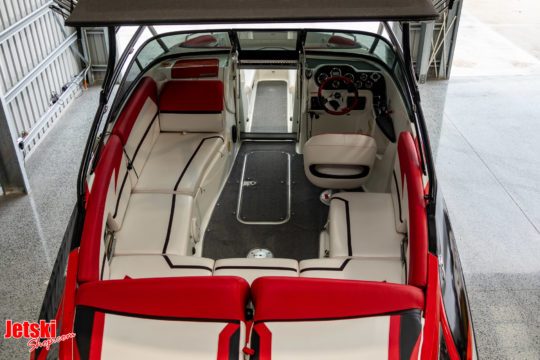 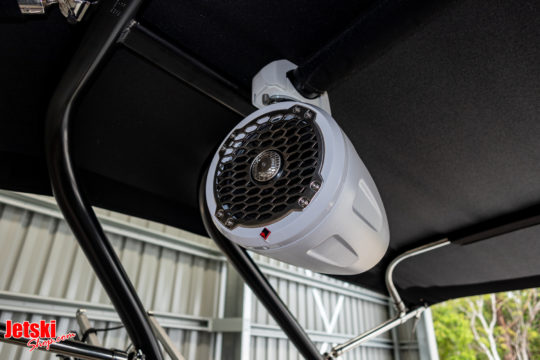 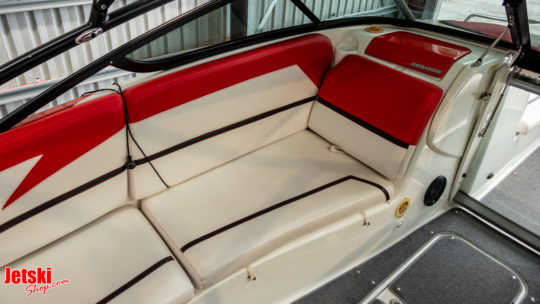 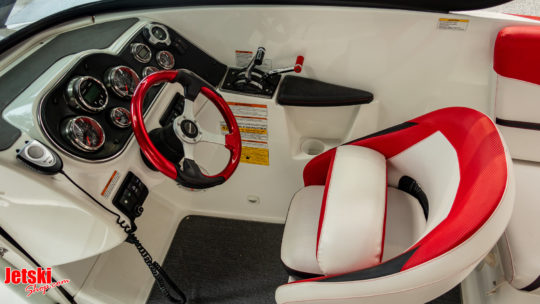 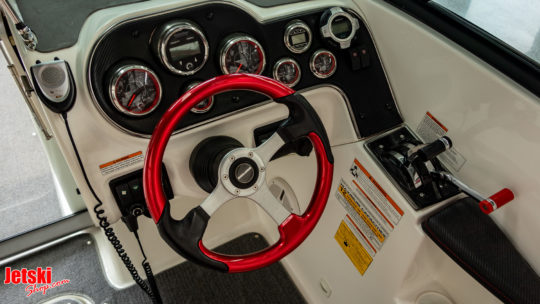 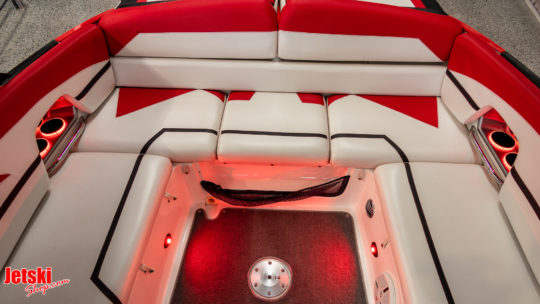 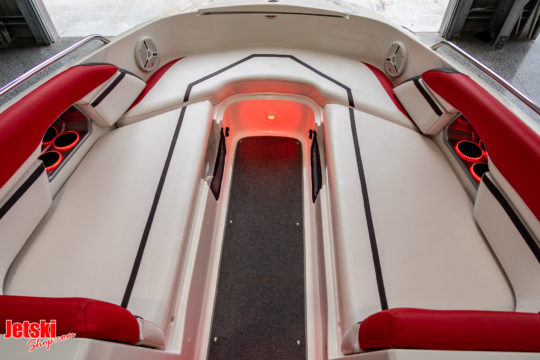 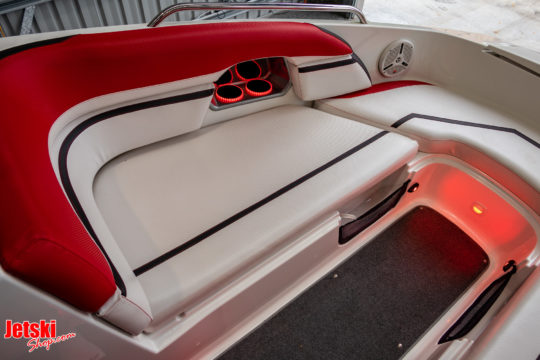 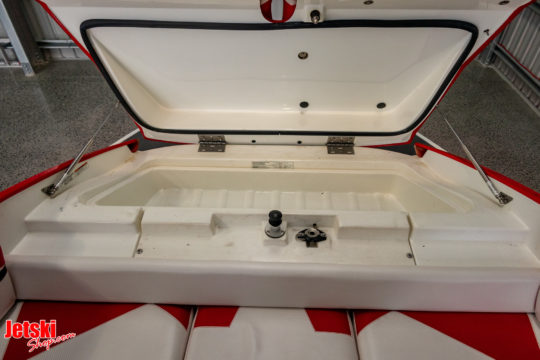 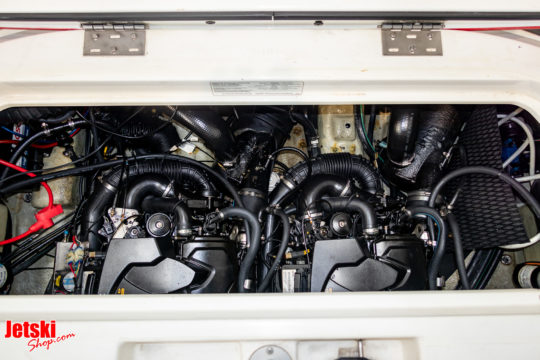 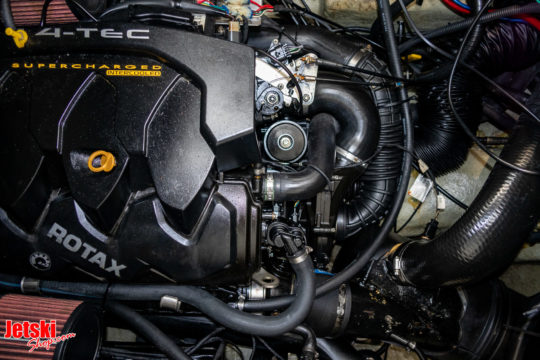 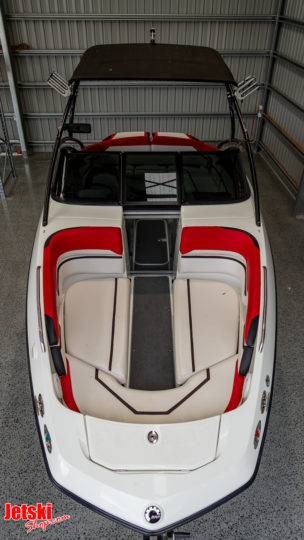 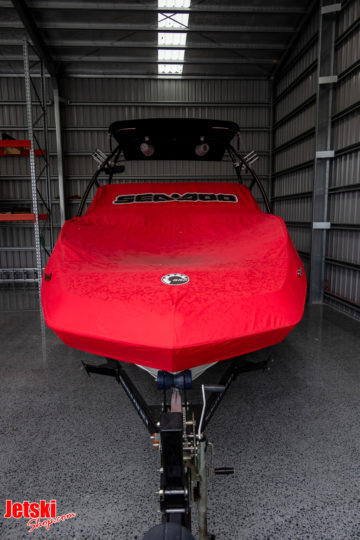 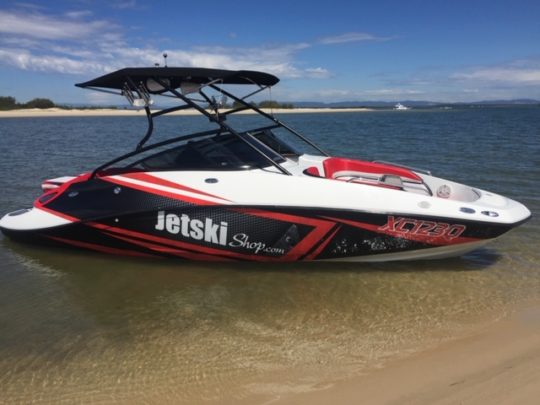 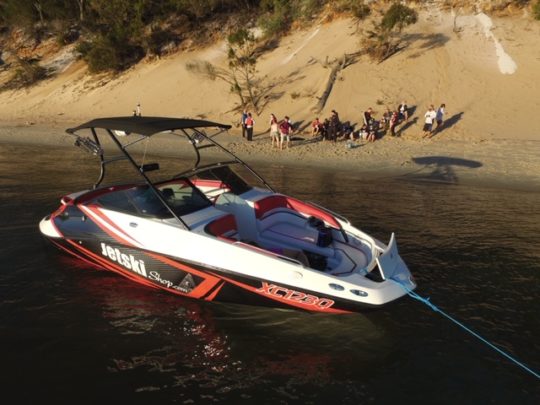 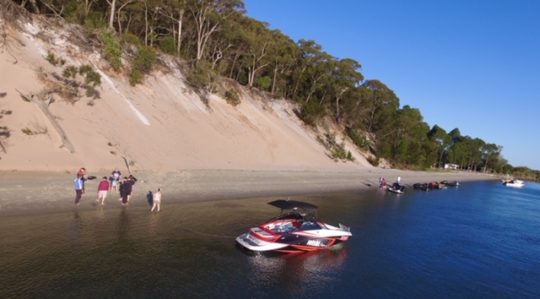 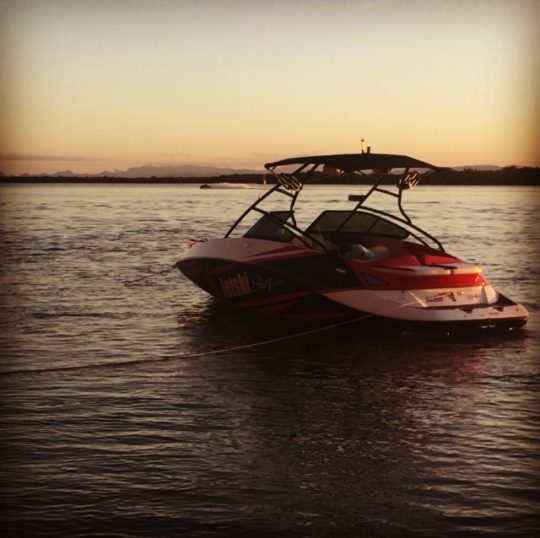 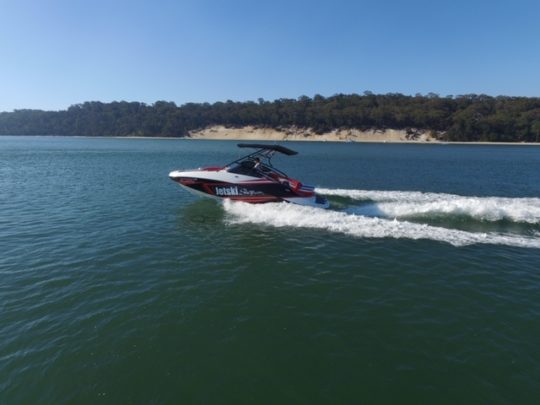 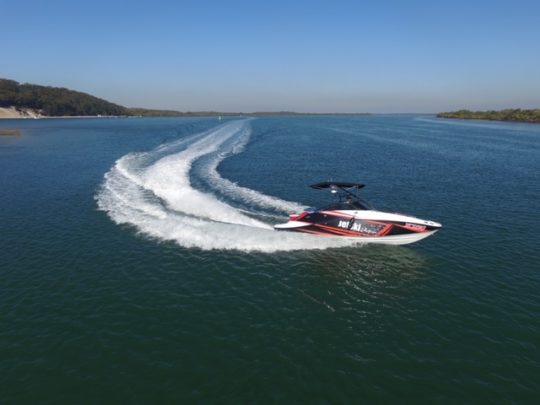 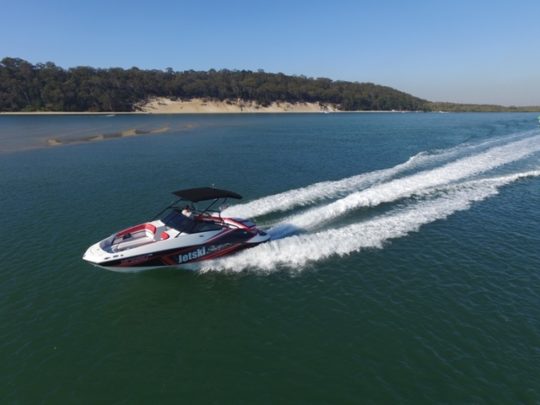 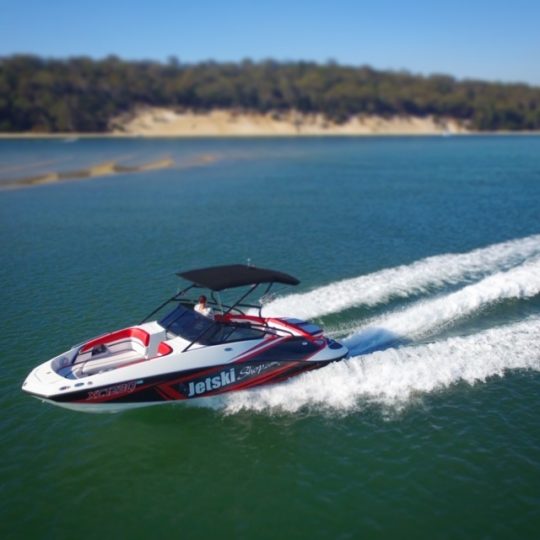